How can you claim to have faith in our glorious Lord Jesus Christ if you favor some people over others?

My brothers, my sisters.

Don’t let public opinion influence how you live out our glorious, Christ-originated faith.

How does this plays out in our lives?

For example, suppose someone comes into your meeting dressed in fancy clothes and expensive jewelry, and another comes in who is poor and dressed in dirty clothes. If you say to the rich person, “Sit here, sir, this is the best seat in the house!” and either ignore the street person or say, “Better sit here in the back row,” haven’t you segregated God’s children and proved that you are judges who can’t be trusted? Doesn’t this discrimination show that your judgments are guided by evil motives?

Listen to me, my dear friends.

Hasn’t God chosen the poor in this world to be rich in faith? Aren’t they the ones who will inherit the Kingdom he promised to those who love him?

But you dishonor the poor! Isn’t it clear by now that God operates quite differently? He chose the world’s down-and-out as the kingdom’s first citizens, with full rights and privileges. This kingdom is promised to anyone who loves God. And here you are abusing these same citizens!

What if you twist the Golden Rule?

You do well when you complete the Royal Rule of the Scriptures: “Love others as you love yourself.” But if you play up to these so-called important people, you go against the Rule and stand convicted by it.

If you favor some people over others, you are committing a sin. You can’t pick and choose in these things, specializing in keeping one or two things in God’s law and ignoring others.

Talk and act like a person expecting to be judged by the Rule that sets us free. There will be no mercy for those who have not shown mercy to others. But if you have been merciful, God will be merciful when he judges you. 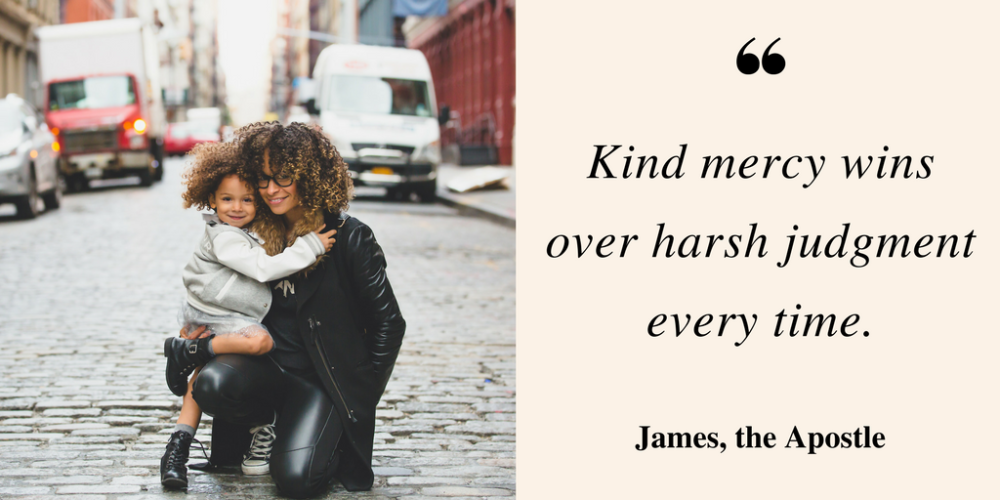 We can’t claim the Faith without exhibiting generosity.

What good is it, dear brothers and sisters, if you say you have faith but don’t show it by your actions? Does merely talking about faith indicate that a person really has it?

For instance, you come upon a person dressed in rags and half-starved and say, “Good morning, friend! Be clothed in Christ! Be filled with the Holy Spirit! I’ll pray for you!” and walk off without providing so much as a coat or a cup of soup—where does that get you?

Isn’t it obvious that God-talk without God-acts is outrageous nonsense?

So you see, faith by itself isn’t enough. Unless it produces good deeds, it is dead and useless.

I can already hear one of you agreeing by saying, “Sounds good. You take care of the faith department, I’ll handle the works department.” Do I hear you professing to believe in the one and only God, but then observe you complacently sitting back as if you had done something wonderful?

Yeah, that’s just great. Demons do that, but what good does it do them? Use your heads! Do you suppose for a minute that you can cut faith and works in two and not end up with a corpse on your hands? Can’t you see that faith without good deeds is useless?

Wasn’t our ancestor Abraham “made right with God by works” when he placed his son Isaac on the sacrificial altar? Isn’t it obvious that faith and works are yoked partners, that faith expresses itself in works? That the works are “works of faith”? You see, his faith and his actions worked together. His actions made his faith complete.

It’s that mesh of believing and acting that got Abraham named “God’s friend.”

Rahab the prostitute is another example. Wasn’t her action in hiding God’s spies and helping them escape—that seamless unity of believing and doing—what counted with God?

See, the very moment you separate body and spirit, you end up with a corpse.

Separate faith and works and you get the same thing: a dead corpse.

~Excerpt from chapter 2 of the Book of James, the Apostle of Jesus Christ. Translations NLT and MSG