“These people get to live here.”

I was biking in rural Uganda, somewhere between Kampala and the Kenyan border. This was the first day of cycling on the Ride for Hope excursion, and we were working our way south through 600 miles of East Africa to our destination in Tanzania. For the most part we stayed away from major highways and instead chose the dirt back roads in favor of less traffic.

I’ve traveled all over America in addition to several other countries in Europe and Asia. But I had never seen anything quite like this.

It was mountainous, for sure. We would bike up a massive hill and then fly right down. I was amateur at best, surrounded by some pretty experienced African and Dutch cyclists. It was a bit nerve-racking at first going speeds I had never done before while riding a hand-crafted, state-of-the-art bamboo bicycle that seemed like a magic carpet more than anything else.

Sometimes, I’ll admit, I screamed a little in raw delight at what I was getting to experience. During one particular moment while speeding down a hill I kept looking all around me at the lush, vast scenery of southern Uganda, simply gaping. I knew I needed to ride, but I also wanted to stare. It was so wonderfully distracting.

There were several people out in the fields harvesting, and I passed a women walking up the hill carrying a basket on her head.

That’s when I exclaimed aloud to myself,

“These people get to live here.”

There was nothing modern about our ride that first day. Most of the villages we passed through were primitive in make-up, a lot of huts and mud buildings.

I got to experience this character and humanity first-hand in a rather unexpected and slightly embarrassing way.

So here’s the story: for the first time in all my travels, I got travelers diarrhea during our first day of riding.

Yep, I just went there.

You see, there are some things in life you can power through and just tough it out.

Diarrhea is not one of them.

Before my pills kicked in, I had to get some assistance twice from the local residents. I know I’d really like to sound sophisticated about this, but in reality it was pure desperation, a plea for help.

Both times me and my Ugandan teammate approached women cooking in front of their homes and explained that this mzungu, this white girl, desperately needed some sort of bathroom facility.

Both times the women simply looked at me and motioned for me to follow. I was then ushered to an outhouse.

I have NEVER been so grateful in my entire life. And I am not exaggerating. In the moment, it felt like a life or death necessity. Just… trust me.

I remember reflecting on that later, recounting the humanity of it all.

I was obviously an outsider. I couldn’t communicate coherently with those that owned the land. I also had nothing to offer to deserve some sort of help or assistance.

I was at their disposal. I was dependent on their help. I was needy.

But more than that, I was also dependent and reliant on their character and philosophy about humanity. I really hoped that they believed that when one person is in a desperate situation and they had a solution to that need, that they would stand in the gap to meet that need.

What I learned was that at the end of the day, we are all the same. If someone needs a bathroom due to a basic bodily function but can’t access one, and I have access to a bathroom that you don’t, then of course you can use my bathroom. Because I use my bathroom too when I need to access it.

Why would those ladies allow me to use their own possessions?

I think it’s because they intrinsically believed I was human as much as they were.

That’s simply what people do who believe they are more superior than other people — those “other” people can’t come into their space or in any sort of way be affiliated with them.

Should we defend people or countries that are degraded as “Sh–holes?”

I have a plethora of African friends who I love. And Haitians. And Mexicans. And Indians. I’ve also visited several of these areas and got to know people on a very local level.

So my first response is to defend against the audacious claim, to use all the examples I can to prove that these people and these countries are emphatically not despicable places. Let me tell you about this person, and that experience, and that beautiful view, and that community.

But I soon found myself out of breath and angry for quite frankly no reason.

I realized, Africa doesn’t need to be defended.

What should be challenged are beliefs of superiority.

Do I have a right to call people or places derogatory names?

Now let’s be completely honest here. I’ve had some experiences and seen some places where the reality of it made me want to feverishly swear off everybody involved. When I dived off the deep end and starting learning about the reality of human trafficking, and especially sex trafficking, I was exposed to some deep, dark things.

The amount of violence and dehumanization is vile. It’s the most gross aspects of humanity on display.

I’ve been in the brothel in India and passed men in the stairway as they went in search of their next woman or girl to buy. I’ve been in the strip club to give support to the women and watched the men and owners and bouncers exploit and reduce the females to what their bodies had to offer. I’ve been in China and observed a woman, acting as a pimp, entreat a man in our group to get a “massage” from a young, beautiful girl nearby. I’ve been in the poor communities of Mombasa, Kenya and observed wealthy European men buying poor women and girls for sex and girlfriend experiences during their vacations.

I could totally justify calling those users and perpetrators of violence a wealth of derogatory names, and I have felt it on the tip of my tongue as I often had to helplessly observe, knowing my intervention at that moment was impossible.

But I’ve come to learn that they only way I could look at those people in the eye and say, “You f–ing bastard,” is to believe inherently that I am better than they are. That I would never act in a manner that they would. That I am a completely different species of a human than they could ever be.

In that place, in a mindset of better-than, different-from, if I was given the power, I could actually justify anything.

Slurs. Violence. Destructive power. Nothing would be too much, because they are not real humans anymore.

That’s the hard part about grace. About mercy. That while I seek for justice, I must also cloak myself in mercy and humility, knowing that I am capable of just as much evil as the next person had my life circumstances or choices been different.

Does that mean practitioners of evil should get away with their acts of violence?

The point is that deep-set beliefs about superiority, no matter how justified, give unfettered license for malevolence.

If you want to lead, you can’t speak slurs about others.

Shouldn’t those who enact and disperse justice from a place of power be held to a standard of equitable humanity?

Sure, people will always exist that hate and use demeaning language to describe their beliefs about others. But those people should be confined and restrained from having access to any sort of power. They shouldn’t be voted into office.

And if you justify voting those kind of people into leadership because they have tax or healthcare or financial political views that align with yours, then are you not inherently saying that money has greater value to you then treatment of human beings? Or, worse yet, perhaps you really are alright with human beings being degraded because they are “other” than you? 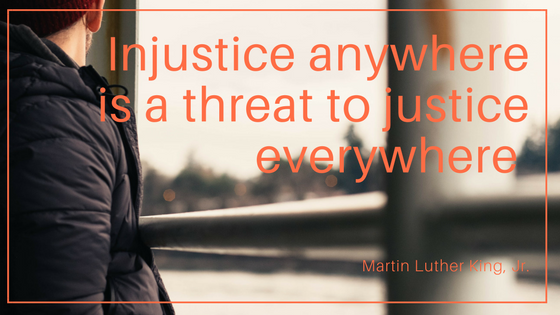 If our leaders who have exclusive access to the use of coercive power in our neighborhoods, cities, states, and nations are not checked to a moral standard that believes we are all equal, then none of us are safe.

Yes, even you are not safe. Even if you assume that right now you are not in the category of sh–hole.

Because one day that belief of superiority might turn against you as well.

And if you struggle with accepting that statement, perhaps ask yourself the question, “Why do I think that I deserve safety over someone else?”

And to circle back, if you needed illustrations that Africa is actually a really nice place and has really kind people because all your life you have only heard that it’s a scary place that has lots of wars and seems violent, then maybe you need to accept the reality that you may not know the full story and that there’s so much about the world that you don’t understand?

You still have a chance. You can still spend time with people and do more research and traveling to expand your horizons that is also coupled with humility that maybe your world is not better than everyone else’s.

Maybe we need more humility that sits down with someone of a different color or country or ethnicity and asks them, “Tell me what I don’t know that you wish I did know.”

Then we may come to the conclusion that we are the same kind of different.