I never quite understood why I am the one doing the things I’m doing.

Yes, I’m typically secretly insecure, conveniently hiding under a layer of, “Of course I can do this and it makes sense and why not? Don’t challenge me.”

More often than not I’ve just tried to ignore and be louder than the suspicious soul voices: “Really? You’re hanging out with homeless guys, prostituted women, survivors of trafficking, recovering addicts, and abused children? Are you serious? You have no idea what they’ve gone through. You’re only naive and condescending. Who do you think you are, some sort of ‘help’?”

Yeah, it’s a slippery slope. Once you begin basing your value on your experiences, those thoughts will remove you from giving and will eventually descend into every other relationship and friendship until one day you’ve completely talked yourself out of being worth anything to anyone.

I’ve fought against giving in to it. Over and over. I didn’t always know why, though. But something in me knew that if I didn’t want others to judge me based on my externals than I couldn’t ever let that filter exist in my life.

But recently I’ve realized that the connection which leads to my compassion comes from a place where shared experiences are completely unnecessary.

If compassion comes from connection, where did that connection come from?

I’ve tried to figure out where everything changed and I started having deeper connection. I had a major spiritual encounter about 5 years ago that challenged my little world and narrow perspective. I knew at that point that I would be seeking out broken people, as I then called them.

Soon enough it wasn’t me going to them anymore; it was them coming to me. Or “random” encounters. Or perhaps just the law of attraction?

At this point it turned into something different, something unexpected. Though I had grown up in churches that did ministries for broken people, it literally offended me when my pastor once asked me, “So how’s your ministry going?” and another couple saying, “You must be really courageous.” I didn’t know why I wanted to react, but part of me wanted to retort, “It’s good – how’s your ministry going?” and “So why aren’t you courageous?” and “This isn’t my ministry; it’s my life and I’m simply friends with the people in my life who happen to be different from me. Why is that a special ministry??”

But I never said that because, obviously, it seemed a little unfair to some well-meaning people. And in its own vein self-righteous.

Yet I still couldn’t figure out why others saw my life as unusual or courageous when I particularly didn’t.

In the past 5 years my friend group has included homeless men and homeschooled guys. Drunks and preachers. Business owners and drug addicts. Strippers and homosexuals. Prostitutes and counsellors. Immigrants and high-end escorts. Missionaries and convicts. Muslims and foreigners. A lot of them I opened my home to or just shared life in general with them.

But I seriously cringe when I just list off categories like that, that somehow we can encapsulate an entire person into one singular label. We are not defined by our life season, our country, our societal culture, or our past record.

Additionally, we are never defined by our worst day or worst choice or worst circumstance.

So when others question my choices, or I question myself, I go back to where it began for me, which was something like, “Wow, you are the kind of person I would like to get to know,” and then as time developed with certain people, specific areas of brokenness surfaced, and that naturally led to opportunities to share life and help out as needed.

Some of those issues became trends. And I found those trends already had a name: social justice.

Then I realized why the so-called “broken culture” was especially drawing to me.

It’s not because they have some extreme external circumstance and it’s “shocking” and I want in on that so I can use their stories to make my life more interesting.

No, that would actually be exploitation of another face.

What I found instead was a common brokenness.

It long stopped being “they are broken” and it became “we are broken.”

For so long in my life I didn’t allow myself to be broken because I was ashamed of any internal brokenness or weakness, and for me not being strong was the most vulnerable and threatening place to be (and yes, still is).  So I created a really safe, protected life that never challenged my strength, which was, ironically, my greatest weakness. I was so afraid of being ashamed, of being vulnerable, that I created walls that kept me safe and everyone else out. It worked out pretty well for a long time.

That wall started to crumble when I went through my own depression and rejection which led me to actually feel and process emotions, and that experience caused me to recognize others with those same emotions around me. It’s like I had this new rejection radar and I’d see someone and be like, “You got it too!”

This wasn’t about me fixing them. But it was about us sharing something.

And that’s all, folks.

And sharing brokenness transcends all barriers: societal, cultural, denominational, racial… all of that other stuff falls below the reality that we are sharing something much bigger, something much stronger than just “we look alike, believe the same thing, have a similar past, have the same struggles, and grew up in the same place.”

People are not projects and each one has incredible dignity, no matter how much their lives don’t make sense to us.

I’m finding that the ones that have the hardest time relating to others vastly different from themselves are the ones who won’t allow themselves to be broken. Oh, we all have it. It’s all there. It’s just that some people have had to deal with it in the wide open (your “societal broken” ones), and some have then allowed the struggle to make them stronger while still embracing the weakness of their continual brokenness.

Others, however, perhaps never had to fight external pressures and live on the edge of survival. Like me for so long, it created this false sense of self-reliance, that I can do anything, that I can fix myself, that there’s not really much wrong with me, that I’m above the struggle, and everyone needs to settle down about “justice” issues all around us.

And brokenness is the secret sauce of compassion. 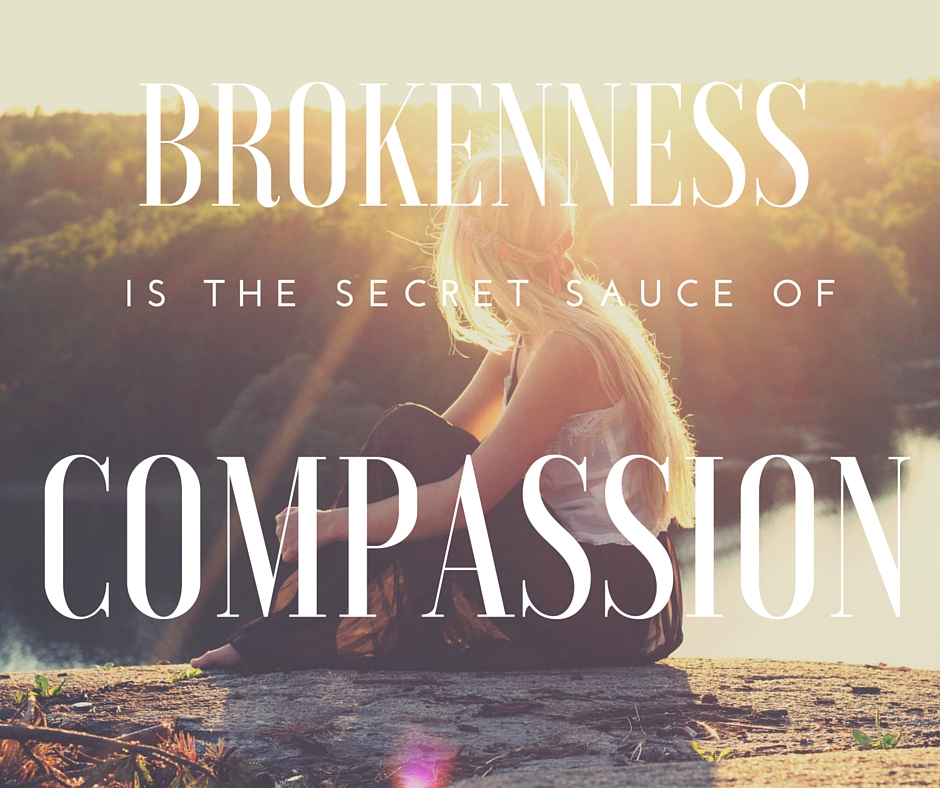 A friend asked me not too long ago, “How do you get to the place of really caring about people, especially people who have hard lives I really don’t and can’t understand?” It kind of surprised me, though I appreciated her honestly, and I stumbled for words. “I guess, you know, uh, you just have to go through it. Just like they are. Like, you gotta feel that pain, the same kind they feel.”

It took some pretty difficult experiences for me to recognize my own brokenness, but now I wouldn’t change it for the world. I feel like I’ve never felt before. Don’t get me wrong – it’s often not really good, like, I don’t sit around thinking, “Boy, this anguish is incredible. Two. Thumbs. UP!”

No, I just feel things really deeply. And sometimes I do something about it, but sometimes it’s just real to feel. To know that some place inside of me still cares, even if it’s anger and bitterness or hope and joy. It’s all part of the process of letting go of strong-enough and embracing the this-burns-right-now brokenness.

At first I thought this post would be about social justice and not trying to create narratives that certain broken lives mean more than other broken lives, that just because we don’t understand someone’s brokenness doesn’t mean that we can withhold mercy.

But … maybe this is a word about that.

Maybe we can’t separate a fight for justice from the hand of mercy coming from a broken heart of compassion.

Maybe what we need is a lot more of is just mercy.

If you can’t find it, then you may just be unaware of it. And you may want to investigate reactions of anger, wanting to control conversations, make sure you are right, and a desire to “do away” with certain people and causes (holla at your girl – been there, done that).

Stepping back and opening up like that will do scary things to you. But soon the things you were so scared of will be forgotten in light of the wonderful people you connect with, people who, by all societal means, you should not be spending your time with. Fear will assault you, as you will hear lingering voices, “Who do you think you are for thinking you have anything to contribute to this person?” Believe me, I live with those voices. But it takes a humble attitude of being needy and broken each day to make it through.

Look for those uncomfortable places. For me it’s been connecting with people and cultures that are way outside of my “experience” realm. I can’t say that I “get it” but I can say I know how it feels to be human (broken), so I can share life with them and feel deeply with them and about them.

When you’re at that place, you’ll be moved to do things most people won’t understand. But that’s OK. I dare you to love too deeply, risk too extravagantly, give too recklessly, and feel too much. It may not be a path that is clear and you may be afraid of what people will think, but the reward is fully alive and well worth each investment.