You know what happened as I met them?

It stopped being “them.”

First, I found that many of my own hurts and wounds were very emotionally similar to those in the “broken” culture. Hey guess what? I’m just as broken! And I think we’re all there– we just have various ways of coping or covering shame.

Second, the economics of my life choices became increasingly obvious. You see, I realized, as in Economics class, that making one choice is a choice for something and a choice against something else. All of our choices and actions and voices and thoughts affect those around us. We affect our culture by the choices we make and don’t make.

This unfortunate name-calling is perpetuated not just in our culture’s movies and music, but also in passing comments from average people and saintly church-goers. It’s a way of removing someone else’s lifestyle from our own connection so that we aren’t also soiled.

This practice also gives us permission to look at a woman who has on provocative clothing as someone we have permission to denigrate and look down on. “She dresses like a slut,” or “What a whore” are phrases that stiff-arm women far away from ourselves and “normal” people, and then categorizes them as simply sex objects who want to express their physical power.

Which, my friend, is far from the truth.

And it totally overlooks the reality that in the sex industry there is often very little choice involved, which brings us to the next point.

2. Believing that those in the sex industry are there by choice.

Prostitution is simply the exploitation of vulnerability. Statistics show that up to 95% of those in the sex industry have experienced sexual abuse in their past. Why do you think the correlation? Think about it— growing up, these children never understood the right they had to their own body. Then, when they grew up, all of a sudden someone offers money for what others have taken freely. It was a natural progression, but only because exploitation has been their normal expectation.

This is a hard one to explain, because many of us do not understand what it means to be totally and wholly lost and without hope, to deal with not just having no way of taking care of yourself, but also dealing with emotional trauma and deep soul wounds. It must take a lot of courage to decide to perform sex acts with someone you don’t know in order to pay the bills and put food on the table.

I’ve talked to strippers, high-end escorts, street prostitutes, and massage parlor escorts, and every one of them said they were there for the money because they didn’t have another way to bring in a real income. And once they were in long enough, it was an endless cycle and nearly impossible to get out.

3. Having a limited, “slavery” view of human trafficking.

Yes, trafficking is a form of modern day slavery. But it’s slavery with a different face.

Slavery simple means forced against their own will. And many in prostitution are forced and exploited outside of their will.

But they are not in physically chains. Yet you can be certain to know that the emotional bondage is very real and controlling.

I had a friend who came to live with me for a while who was escaping her boyfriend who had literally beaten her with hangers, burned cigarette butts into her skin, stabbed her multiple times, and she still defended him and blamed it all on herself. You see, the chains we need to be aware of are the chains of mind control, brainwashing and manipulation.

And those kind of chains are the most frightening and most damaging.

4. Not being aware of children.

It’s hard to hear, but children are being used as sex objects. In America. In our cities. In our neighborhoods. On our watch.

It’s easy to overlook kids as just tiny humans and not take their non-verbal and verbal cues seriously.

But here’s the reality: the U.S.Department of Justice states that the average age of entry into prostitution is 12-14 years old.

And that’s trafficking. And it’s happening to at-risk children as well as not-at-risk children everywhere. Be sensitive to the children around you, especially ones that may be “acting out.” It may be for a reason.

Somebody pays, and it’s typically the girl behind the camera.

You see, the fact that trafficking exists means that there is more demand than there is supply. The more clicks, the more proof to the leaders and marketers of the sex industry that the demand is still there. And they will do whatever it takes to supply that demand.

Think logically about this for a moment: Why would she say she doesn’t like it (to you or anyone else)? If she doesn’t feel safe around you, if she doesn’t trust you, if she knows she’ll get beaten if she doesn’t perform or bring in enough customers, then of course she’s going to tell you whatever you want to hear. Of course she’s going to act like this is the best life ever. Because she knows to be honest would mean losing her income, or losing her health, or coming to grips with her hurt and trauma beneath the surface.

Which brings me to the next point…

7. Being brutally insensitive to trauma.

Here’s the thing about trauma— when you try to explain your feelings and hurt and then someone blames you for it or gives a pat, sympathetic answer, it’s a slap in the face and a trigger to run and not trust anyone ever again with those feelings.

Those that have experienced varying versions of trauma (whether verbal, physical, sexual, emotional, etc…) are in desperate need for help and sometimes that plea for help may come out in odd ways or with unexpected reactions.

But often what they need most is for someone to empathize and just be with them in the moment.

We continue to perpetrate survivors of trauma by not listening and by walking away in their deepest hour of need.

8. Expecting survivors of trafficking to be OK with simply attending a community group and reading their Bible every day.

Survivors need therapy. Though many won’t say that or admit to it (who wants to admit they have serious issues? Yeah, me too), they’ve been through mental warfare and need emotional intensive care. This is not church small group stuff. This means professionals and years of work and tender care.

9. Taking people at face value and assuming you know their story.

You may be surprised to realize how many prostitutes, strip club dancers, and abuse survivors there is living inside your inner circle. We all have hidden lives, do we not? And often by not being vulnerable ourselves, we place this plastic film over our lives that looks like strength but smells like shame. It keeps us protected, but also keeps others at bay.

If we’re not vulnerable about our pain, then why would anyone else share with you about their hurts? or their struggle with sex? or their shame of prostituting?

10. Trying to rescue those who are being trafficked.

This is the one I’m the most guilty of (though believe me, I have been guilty of all of the above at one point or another). It’s easy to see this huge problem and decide to go on saving campaigns and rescue the victims from destruction.

The reality? This is just another power play.

It’s yet another way that these women are experiencing control from yet another person or group.

It’s deciding, “Hey, what’s happening to you is bad, so here’s what I’m going to do. I’m going to make a decision for you that is obviously the best choice for your life. I know this is best. We’re going to do this.”

That friend I mentioned earlier? I was incredibly overwhelmed with feeling the responsibility to save her from this terrible man and terrible mental state. And it was seriously stuff.

But all I did was push her farther away, because then she was the victim and not the friend.

I’ve had a change of mindset. As Bob Goff says, “I used to want to save people. Now I just want to be with them.” 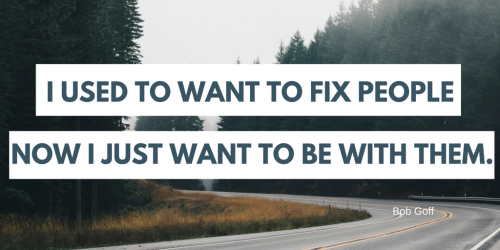 So how can you make a difference today?

First of all, think through your thoughts. How do you think about those in the sex industry?

Secondly, think about your choices. How are some of your seemingly small decisions contributing to human trafficking?

Lastly, support one of these anti-trafficking organizations today. It’s Giving Tuesday and after days of shopping, make a real effort to give directly to help survivors of human trafficking.

Here are some organizations that I have personally worked with and/or volunteered with in Chicago. They are all doing amazing work in our city.

What I love about CAASE is their focus on Ending Demand. They have an educator who goes into local high schools and middle schools to talk with boys about the realities of the sex industry and the fallacies they are seeing and hearing around them.

They also take the lead with legal advocacy in Chicago and Illinois. At the end of the day, if the laws don’t change, then longterm change is not possible.

Through New Name I have been able to do outreach in massage parlors in my neighborhood and come to a better understanding of international sex and labor trafficking. Massage parlors are very difficult as there is a huge language and cultural barrier. But New Name has a fantastic approach and view of these women and we are there to love and support and help however needed.

Last year I spent a lot of time with the Dream Center and was able to get involved with a street prostitution outreach. This was my first time “on the streets” and I was very humbled by my lack of understanding and lack of sensitivity. I found so much of this life is about survival and control. The women and men who work in the Dream Center are truly some of the most courageous people I know.

They have housing and after-care for girls who have been trafficked and women who have been in the sex industry and/or drug addiction. This is a place absolutely over-flowing with love and care.

So if this article has been helpful in your understanding at all about human trafficking, please share. Also, please feel free to email me or comment with questions or additional insights. This isn’t about pushing my opinions; I want this to be all about starting conversations.

So let’s have conversations that love and help people.