Dear God, thank you that I am not like Josh Duggar.

You and I both know that their strict, conservatism was a huge front to the realities of his and his family’s life.

He is now exposed for what he really is: a sinner.

Well, God thank you that I am not like this hypocritical, self-righteous sinner. Not only would I never commit an act like that, but I would never be so religious and fake. I am the most un-fake person I know and can make pure judgments of others’ sincerity.

I hope that by me standing up for what’s right and shaming him and this fake Christian culture that you would be proud of me, that I am encouraging all people everywhere to be real and transparent. Since the Gospel cuts through truth and lies, I am so thankful that I can minister the Gospel by heaping shame on him and his family, because shame is what leads anyone to change.

It’s what he deserves. I hate people like that, judgmental people that act like they’re better than everyone else. At least I don’t act like I’m perfect. And because I don’t pretend like I’m perfect, then I have a right to announce all the hypocrisy of those who do pretend, even if I don’t know them. I can tell; I know these situations. I’m a really good judge of intent and character.

So God, I thank you I am not like this sinner, Josh Duggar. Thank you for all of your grace to me. It makes my life so much better. I’m glad I can receive it, unlike other sinners. In your name, Amen.

It’s such an easy trap to fall into, the trap of merciless shame-dumping: The Judgement Zone.

I know this Judgment Zone because it’s my gut reaction to situations like this one, when really bad things happen to the vulnerable ones by people who claim to be “good.” I hear these very words in my head and start boiling with anger.

But here’s what I’ve realized about this Judgment Zone: when we live in the Judgment Zone and rally around sin to expose it, no matter how big or how little, here’s what we’re really preaching:

“No one is ever allowed to mess up. If you want to be included or wanted, you have to be perfect. Or at least my definition of perfect.”

And we put more and more distance between ourselves and our relationships and our community.

We hold up the banner of Josh Duggar’s mess and shout, “He must be punished! And he must be extra shamed because he was faking! And it’s our duty to exploit it, to make sure that everything is clear and ends up being perfectly fair.”

Because he is the only one that’s ever messed up or pretended that he was something he wasn’t.

Because he is too far gone to be shown mercy and grace.

Because he’s tearing down the name of goodness and God in our culture.

I am just as appalled at evil and injustice as you are. I’ve seen it up front and personal. When my friend was beaten and abused by her boyfriend for months and she escaped to my house. When my friend was raped and the courts wouldn’t believe her and the perpetrator goes free. When I lost all my work when my previous company took unjust legal action against me. 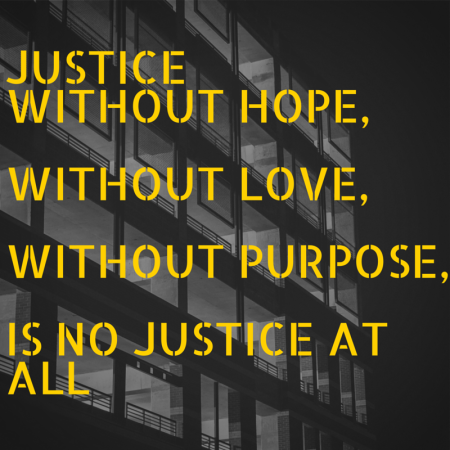 But justice without love, without hope, and without purpose is no justice at all.

We all applaud turn-around stories of people who were living destructive lives and then have a major “come-to-Jesus” encounter where they do a 180 and totally change for good.

We feel good when we hear stories like that.

But who will stand in the gap for them?

Who will be the first to say, “I forgive you. I want the best for your life. I offer you a safe place to be imperfect and go through your change”?

Jesus is such a good example of this. He’s the one who sought out the dirtiest, most rotten ones of society and said, “Follow me. Let me serve you. I make all things new.”

So now we can also can look at the ones with the most exposed, dirtiest deeds and say, “Come be with me. Let me serve you. We’re going to go with Christ and he makes all things new.”

This is for the broken ones. Rich or poor. Popular or outcast. Perpetrator or exploited.

When we live less than this, when we become judgmental of the judgmental, we raise walls of separation.

And those observing from the sidelines who need help are cowered into silence because if anyone knew what was really going on in their lives, they know they would be shamed and bullied into the dust just like this guy was.

So they live in quiet conflict, their secret lives sealed shut beneath the surface.

But we can only go so long before the reality of our issues come out. And I believe that a culture of authenticity and grace-covering imperfection can help all of us heal of stewing internal struggles.

I want 14 year old boys who struggle with pornography, sex addiction and an unhealthy view of women to know that there is a place and a people where they can go and open up about their imperfections and find loving help.

I want 40 year old crack-addicted prostitutes to know that there are people who love them and see them as the valuable, cherished women that they are and are willing to walk with them into healing.

I want the cheating husband with 3 kids to know that he doesn’t have to live a fake life anymore, that there is a place where he can come in his brokenness to find forgiveness and restoration.

This is called radical grace.

Because sometimes some things seem completely unforgivable. It would just be too radical.

But to the broken ones, to the ones that see their helpless state, this radical grace is freely offered.

And we are the agents and communicators of that grace in our relationships and communities.

And if that abuser, that pimp, that cheater isn’t broken yet? Well, it’s not our place to shame and break them.

We make boundaries in our lives, we pursue proper justice through our legal system, but we don’t light shame fires.

How do I know this?

Because I am the one who has received this kind of radical grace and unbelievable mercy.

And if I can’t give back what I have received, did I ever truly receive it in the first place?